You are here:
NewsStories 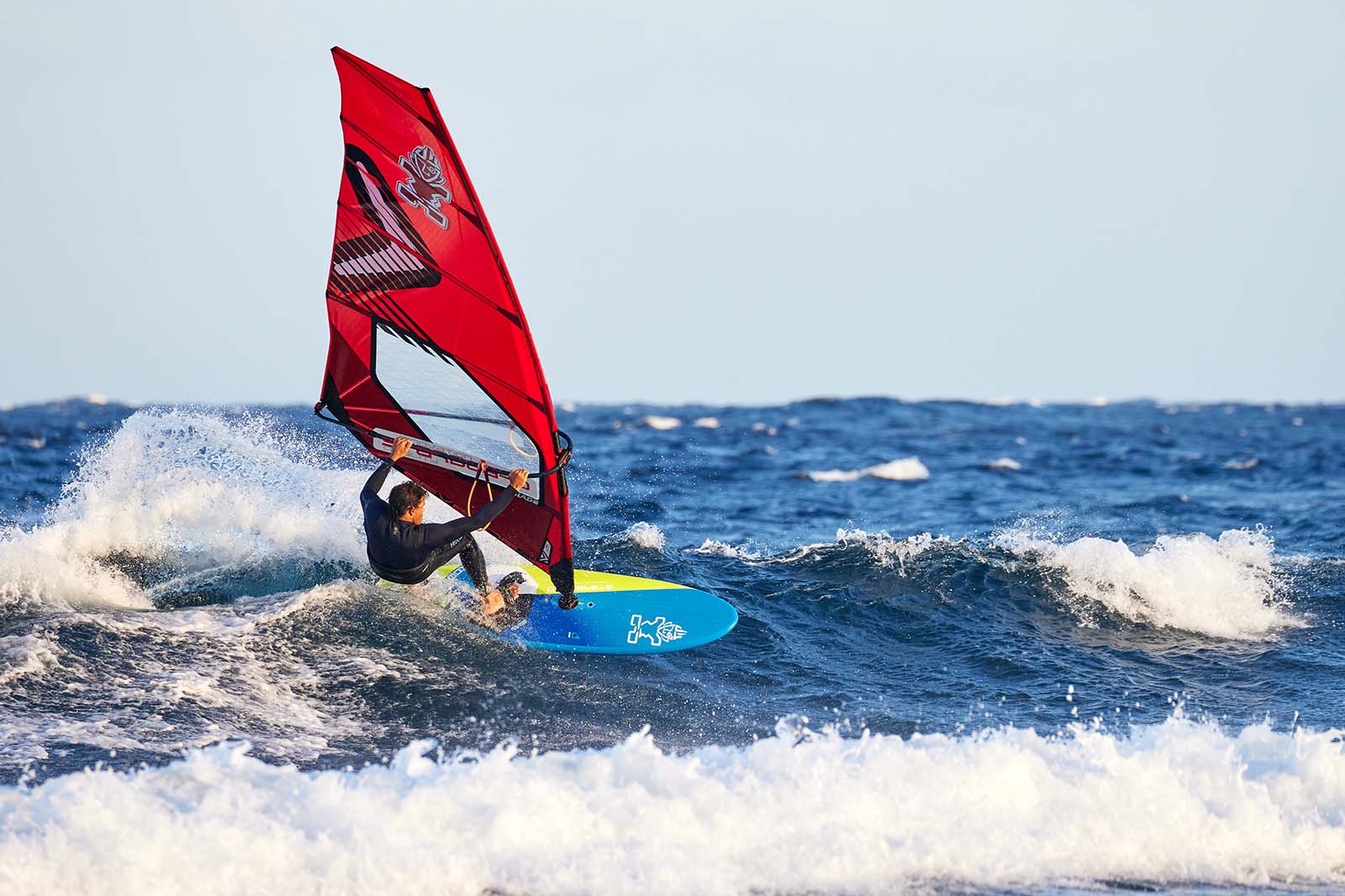 You asked, we made it happen, since 2021 our Kodes come in the new XL sizes of 125L and 135L. Starboard rider and technique guru Peter Hart explains how the new XL Kodes can transform the ambitions of larger windsurfers and answers the question of why you should perhaps get a large Kode instead of a classic freeride board?

When I heard Starboard had released a 125 and 135L Kode, I leapt with joy, not just for myself but for all big people out there who for so long have craved an easier route into waves and manoeuvre-oriented sailing. When someone books onto one of my wave courses and reveal in passing that they weigh in at 100 kg plus, my heart sinks a little. This is not a ‘fattist’ judgement of their lumbering lack of agility. They could be former Olympians ripped and in the first flush of youth. It’s just that thanks to their lack of board options, I know they’ll struggle. One guy recently typified the situation. He turned up with 150L and 125L freerides and a 100L FreeWave which he’d bought a few months back in preparation for his new challenge of getting more into waves. His own words: “I can only use it when it’s absolutely howling… and to be honest, I don’t get on very well with it.”

A 100L board is simply too small for a 100kg guy. t’s a proper ‘sinker’ for him and a massive leap from his 125l. He needs at least 25 knots of wind to get it planing. But worse than that, it’s a totally different design compared to his free-rides. So he’s trying to come to terms with a completely new style of sailing and turning – at the same time coping with bullet gusts and a wild sea state. The desire to survive trumps all else and makes him revert to his old back foot style and thanks to having a fin 30cm shorter than he’s used to, he spends the whole session going sideways.

An XL free-wave would allow him to experiment with the key elements of a manoeuvre-based style in less wind and on more friendly seas. He could load it with a light 6.5 wave or cross-over rig and be planing in as little as 18 knots. With the calm of mind and no longer fighting the conditions, he’d be more receptive to a change in set-up and style.

FREEWAVE?! A few words about the category Freewaves.

My clients are often confused. Is it freestyle wave or free-ride wave? They ask. Very few people that I come across buy a FreeWave with new Skool freestyle at the top of their priority list. What they really want is a fast board which is easier to gybe than a Freeride; which is more controllable in chop and high winds and which you can take into the waves. So I was really pleased to see that the thick freestyle tail and rails of the older Kodes, have been replaced with thinner rails and more pinched tail which grip so much better.  And the outline – I have used Stubbys and they’re fun – but I much prefer the classic curvy outline. My clients admitted too that they didn’t really  ‘get’ Stubbys’ and suspected it was a fad. 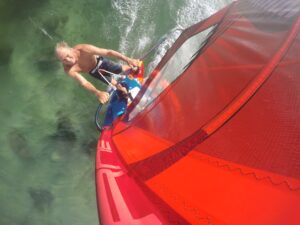 PETER HART CRUISING ON HIS KODE

The Kode comes with the option of a big central fin. If you locate the straps outboard on the rail, you have yourself an excellent free-ride board. It’s great to have the option for marginal days but … if that’s all you want to do, just get a Carve or a Futura. Instead, I urge you to be bold and play to this board’s strength which is its ability to drop into cranking turns. By setting the straps inboard and fitting the thrusters, you are forced to change your style and become a more active windsurfer.

SET-UP and Sailing Tips For The Kode XL:

– Set the straps up inboard and stand more upright to drive the board rather than the fin and rails.
– Reduce fin size, going for the tri-fin set-up, and get planing by bearing away more rather than hoofing against the fin.
– Going upwind sailing off the front foot and using windward edge rather than the fin for resistance.

In the video below Phil from Get Windsurfing explains how you can set up your Kode for sailing in wavy conditions.

How To Gybe Tighter: The Kode XL really helps to bring a new dimension to gybes and carving.

The key to taking your sailing into rough seas and waves is the ability to carve tightly, so you can spin around between swells or bottom turn without out-running the wave. Free-ride boards gybe well but the big fin resists sudden changes of direction, forcing you into a wider arc. This is where the XL KODE really shines.

– Front foot: With the straps inboard, you can learn the key sill of front foot carving – that is to say, like surfing, starting the carve with the toes of the front foot and then steering out of the turn with the back foot.

– Tighter initiation: With the tri-fin set-up, the XL yields to the slightest toe pressure, and its soft, curvy rails grip allowing you to roll over into carved turns with little bear-away. The feeling that the board likes to be pushed hard gives you the confidence to take up ever steeper angles. I had no idea you could get so radical on such a big board! 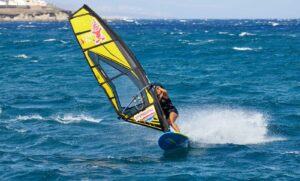 Lena Erdil Carving A Tight Jibe On The Kode

The Float and Ride Question:

The one aspect of wave sailing that big people have always struggled with is float and ride – that is to say ‘bogging’ out in light winds through the break in order to ride the swells back in. They’re forced either to take a big free-ride, which does not turn well on a wave face or a WindSUP. Some WindSUPs are great in the waves but they demand a unique longboard pivoting style. But with an XL free-wave, the sailor with the fuller figure can finally make proper, full rail bottom and top turn in light winds. 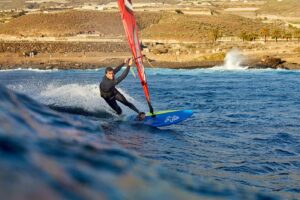 The truth is that a lot of free-riders initially dislike the free-wave sensation … just because it’s different. They miss the slippery feeling of their free-ride gliding over the water and rising on the fin. Thanks to their extra ‘V’ and smaller fins, the XL Kodes sit a bit deeper in the water. But this is a positive thing, giving you more control and stability in the rough and especially around the turns. The inboard, the upright sailing stance may feel less connected and powerful – but here’s the main difference. You’re set up for the manoeuvres, not for straight-lining. As soon as you’re planing, DO SOMETHING! The XL Kode encourages you to be dynamic. 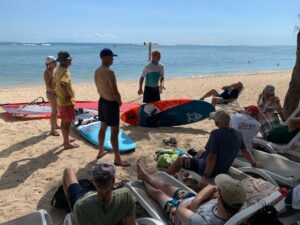 Peter Hart Presenting The New Kode During His Mauritius Clinique

Peter Hart runs a worldwide clinic tour. Check out dates and availability on www.peter-hart.com. And to read his great Masterclass articles each month in Windsurf Magazine, get a print or digital subscription by going to www.windsurf.co.uk