Our legendary team rider Björn Dunkerbeck will release his new film documentary this year. The premiere of Dunkerbeck’s film will be in Germany, Sylt during the PWA World Cup. The trailer takes you behind the scenes in Namibia, where there are a lot of riders chasing their speed dream! An epic speed channel also means crazy crashes when they push their gear to the limit.

Judging by the trailer, it looks like an action-packed film about the 42 x World Champion who is still pushing his limits to the max. Even though he is no longer seen on the PWA World Cup circus, our legend regularly pushes his limits and best speeds. During his last speed runs in Namibia, he sailed as fast as 103,68 km/h (55,97 knots), the fastest time on the water on windsurfing gear.

What is next Björn Dunkerbeck?

«I want to lock 100 kilometers per hour over 500 meters. Luderitz is an adventure every day. You need to get ready to go all in every time it blows hard.

I hope I will reach my goal next time I go there with my new iSonic speed boards. The GOAL of sailing 100 km/h on a 500 meter run-here we go!»

We are happy to have Björn Dunkerbeck back on Starboard. He is also the father of our talented wave sailor Liam Dunkerbeck. It’s awesome to see how Björn has made a pathway for his son Liam in windsurfing. After all, windsurfing must be one of the greatest family sports out there. Sharing a session or a wave ride with your dad, mom, or your kids will be memories that will last forever. Björn is a true example of sharing his passion with his family. 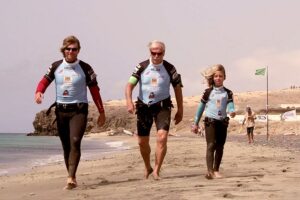 Eugen, Björn, and Liam. The Dunkerbeck windsurfing family is in its third generation.

If you want to test your speed sailing skills, don’t miss out on the Speed World Championship that will happen from the 25th to 30th of June in Sotavento Fuerteventura. Join the adventure with Fuerte Action and Dunkerbeck Speed Challenge. The Virtual Dunkerbeck Speed Challange is also available, so do not miss out! This is for windsurfers in need of speed!